In the centre of Italy, between the Adriatic and Abruzzo's Gran Sasso mountain.

We are situated in the centre of a large garden located in the shadow of the charming view of Sant'Omero, a village straddling the Vibrata and Salinello Valleys.

The area is one in which nature, art and tradition come together in harmony.

We are surrounded by fascinating and picturesque routes and pathways that can be explored on foot, by bicycle or on horseback, through traditional villages with old earthen houses, known as pinciaie, and country churches.

It is a sheltered location in which, as far back as Roman times, the land was farmed and water collected in ancient reservoirs called the le Grotte dei Saraceni, which can still be seen in the area today. 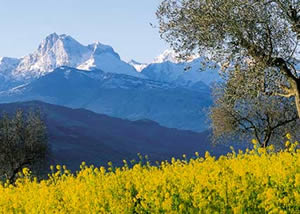 Sant’Omero is a pleasant township in the province of Teramo that is strategically located between Abruzzo's Adriatic coastline (less than 10km away) and the spectacular Gran Sasso and Monti della Laga national park, 30km away. The area of Sant’Omero and the Grotte dei Saraceni Country House are within easy reach of the A14 Bologna to Taranto motorway (Val Vibrata exit) and the A24 Rome to Teramo highway (San Nicolò a Tordino turn off). If you are coming by train then the stations of Alba Adriatica or Giulianova are just a short bus ride away (Arpa bus line).

A particularly interesting tour is provided along the ippovia or bridleway, with views of the areas surrounding Sant’Omero that are associated with the old farming traditions, as well as venues of great historical significance. Like, for example, the Church of Santa Maria a Vico, listed as the only totally intact architectural structure in Abruzzo that can be dated back to the year 1000. The journey along the twenty-kilometres of bridleway will lead tourists through the enchanting hill country down to the valley where the river Salinello flows and there is an opportunity to relax and get back in touch with nature. 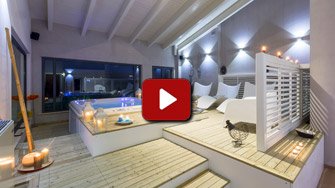